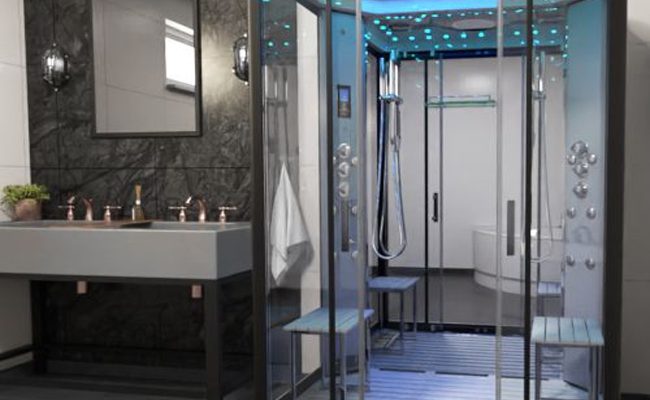 When assembled and installed, shower cabins stand in the required operation position, similar to a washing machine or dishwasher. It is usually supplied flat-packed to simplify shipping and handling. In the same way as the appliances mentioned above, a shower cabin isn’t fixed to the floor or wall, allowing it to be easily moved for service in the future. 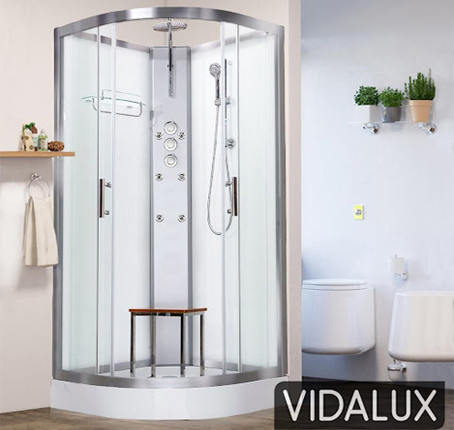 SOURCE: VIDALUX.CO.UK – A typical, open at the top shower cabin

Key Components Of A Shower Cabin

There are many types of open-top shower cabins. A typical open-top model includes the tray, control tower with shower valve, interior back walls, front frame, glass, and doors that are most often sliding. Furthermore, the completely enclosed shower cabin models come with a roof or ceiling panel, usually containing the rain shower head and lighting.

In the bathroom or other specified area, the sections of the shower cabin are then put together, following the instructions provided. All the panels either screw together or “click” together, should a particular brand has a rapid assembly method.

Many different types of glass form the back walls of shower cabins, with black, white, mirror, or matt effects often being the most common choices. In either case, shower cabins do not require the additional cost or mess of tiling. Moreover, since the interior panels are not transparent, finishing the walls behind the shower with tiling isn’t necessary since the walls won’t be visible once the shower is installed.

There are three showering options in most of these models: a monsoon shower overhead and a hand shower plus back jets. Of course, all of these options are not used simultaneously! When the selector knob on the shower valve turns, the user can easily choose between the desired shower functions. At an additional cost, the shower cabin can also have a steam room function, provided by a steam generator mounted at the back. 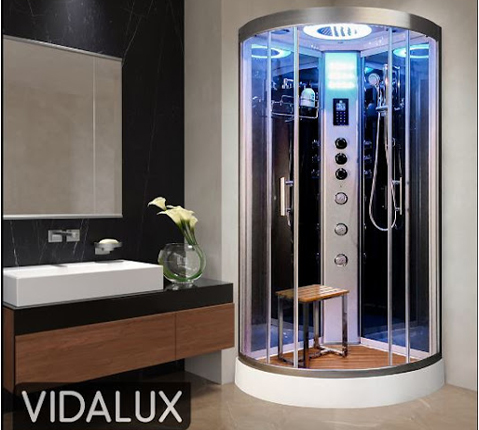 Despite being a relatively new technology, shower cabins today are capable of far more than just giving you a quick in and out experience. Full-enclosed models often have a built-in FM radio and speakers, and some come with built-in DAB radios. Most today also come with full Bluetooth connectivity. So at the same time as showering, you can stream your favorite sounds and set some mood lighting if you wish. Today’s shower cabins’ cutting-edge specifications and experience include LED illumination and chromatic lighting.

Are They Worth The Money?

When researching all potential showering options, many agree that shower cabins represent excellent value for money. As of May 2022, depending on the type, brand, and model, the Smart Price Warehouse average price for a 900mm x 900mm open-top shower was £675; a fully enclosed one at £1100, and a shower cabin with a steam function at circa £1350.

Compare this to a traditional shower, where a tray, screen, shower valve, and doors are all purchased separately. All then needs fitting by a plumber plus the interior tiled, with the additional cost of tiles and the labor. According to CheckaTrade.com, in 2022, a traditional shower would cost around £2000. From this writer’s personal experience, that cost is very much on the low side, confirming that shower cabins are certainly worth the money.