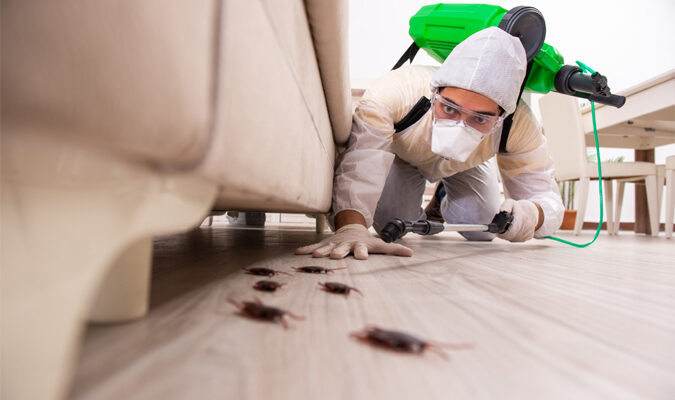 One stink bug is harmless. But what if there are more? The little brown insects can quickly colonize and take over a home.

One study, in particular, discovered 26,000 stink bugs living in a Maryland home.

From how to deal with stink bugs to killing stink bugs sunbathing on your window, let’s explore the best tactics for maintaining an insect-free home.

The insects are an invasive species that made their way to America from eastern Asia. The first stink bug spotting was in Allentown, Pennsylvania, in 1996.

Fast-forward to today, and stink bugs are found in 38 different states and the District of Columbia.

Stink bugs have a mottled grayish-brown exterior, six legs, and antennae. They are about three-quarters-of-an-inch long. Their shell creates a long, oval-shape.

The invasive critters have wings. Full-grown stink bugs are proficient fliers, but juveniles must wait until their wings are fully developed:

Why Are They Called Stink Bugs?

Similar to skunks, releasing a foul odor is a stink bug’s best defense. The insects generate a smell using chemical glands in their abdomen.

When they feel threatened, stink bugs release an odor similar to cilantro or coriander. The smell can linger in the air for hours, making it unpleasant for homeowners who squish stink bugs in their homes.

The best way to kill a stink bug without smelling the consequences is to take them by surprise. Try sucking them up with a vacuum instead of squishing them with your feet.

Signs of a Stink Bug Takeover

The problem with stinkbugs is one or two can quickly become a full-on infestation. The average female can lay between 20 and 30 eggs at a time.

Stink bugs are not dangerous. They do not bite, sting, or burrow into household structures. However, their smell and presence can create a major annoyance to homeowners.

The insects are most likely to infest a home during the winter months. They look for warm areas to nest and lay their eggs.

Signs of a stink bug infestation include frequently spotting alive or dead stink bugs around your home. They are most commonly found in warm and sunny spots, like on windows facing the sun.

How to Deal With Stink Bugs in Your Home

Remember: if you see a stink bug, don’t squish it. That will cause it to release its odor.

Stink bugs are not fast movers. If you spot one, pick it up using a paper towel and take it outside. Once outside, crush the stinkbug with your foot.

Can’t you let them go into the wild?

For spiders, yes. For stink bugs, releasing them back into the wild does more harm than good for the environment.

Stink bugs are an invasive species. They decimate crops, trees, and leaves. Since they are not a natural part of the American environment, their presence disrupts our ecosystem.

If you can’t get outside, flush the stinkbug down your toilet.

These methods are ideal for one or two unwelcomed visitors. But for large-scale infestations, you need to implement some more serious tactics:

If there is an area of your home with numerous stink bugs, eliminate them using a soap-based solution.

Grab a large bucket. Fill a quarter of it with water. Add one teaspoon of liquid soap and stir.

Place the bucket below the stink bugs. Use your fingers or a stick to gently knock the bugs into the bucket.

Once in the water, take the bucket outside. The bugs will eventually drown.

Stink bug colonies can grow quickly. While you might not see the bugs, there could be thousands living throughout your house.

If you have a full-blown stink bug infestation, it is best to let trained specialists get rid of large stink bug colonies.

A professional pest control team will search your property and quickly exterminate all stink bugs and their eggs. They will also try to identify the cause of the infestation to prevent another one from occurring.

The mid-Atlantic region of the US reports the highest concentrations of stink bugs. Stink bugs are most likely to appear in homes during the fall and winter as they seek shelter from cold weather.

If you live in a high-risk area, take action to prevent an infestation:

Stink bugs enter homes via cracks in pipes and siding. Scan your property for holes and seal off cracks using silicone-latex caulk.

The insects may also scurry in through open vents. Seal them with protective netting to stop the bugs from accessing your home.

Stink bugs are drawn to warm objects like lightbulbs. Porch lights and outdoor lamps lure the bugs to them. Once on your property, the bugs may try to find a way inside your house.

Refrain from using outdoor lights as much as you can to prevent the stink bugs from finding their way onto your property.

Keep your home dry to prevent a stink bug infestation. Stay on top of plumbing repairs and use a dehumidifier to reduce moisture in damp areas of your house.

Check Your Belongings Before Entering Your Home

Stink bugs are sneaky and easily go unnoticed. Therefore, you may be the one responsible for bringing the critters into your home.

Before going inside, do a quick scan of your belongings.

Make sure no stink bugs are clinging to your grocery bag or sticking to your pants. If you have pets, make sure they are not accidentally carrying stink bugs on their fur.

While stink bugs are not poisonous, they are frustrating to find scurrying throughout your home. Prevent an infestation by reducing household moisture, sealing entryways, and turning off outdoor lights.

And if the bugs are already in your house, contact your local pest control experts for help.

Now that you know how to deal with stink bugs, what other ways can you spruce up your home?

Best Home Beautifying Gifts for Your Loved Ones
4 Things to Know Before Hiring a Property Management Service
Why doesn’t your Association have a reserve study?
5 Propane Safety Tips For Your Home
Common Pest Control Mistakes Homeowners Should Be on the Alert For
How to Prevent Mold in Your Home This Winter
The Insider's Guide to Pole Hedge Trimmer
What Nobody Tells You about Moving House - Moving House Tips