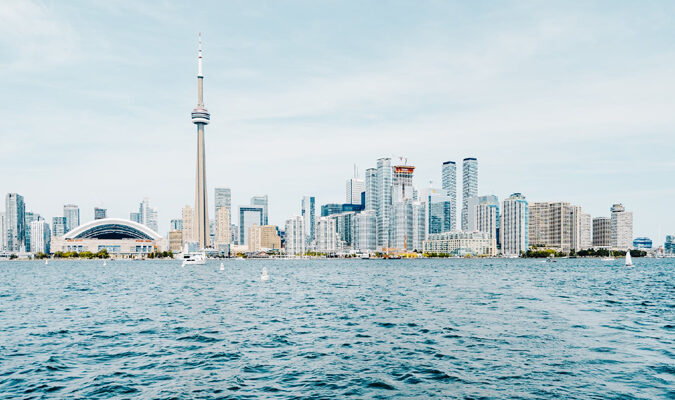 Do you have plans to visit Toronto? Before booking your flight and accommodation, it is best to read some information about Canada’s largest city first. Toronto is the center for finance, business, culture, and art. The city is full of foreigners who choose to live here. The city represents the country’s history showcasing old structures that play a vital role in the past. Below are some of the famous buildings around the city.

First on our list is the famous CN Tower. You will know you are in Toronto if you see this building. The Canadian National Tower, popularly known as the CN Tower, was built in 1976 and was once recognized as the world’s tallest building from 1976 to 2007. It is ranked as the 9th tallest building in the world and the highest in America.

Every year, the estimated number of visitors it can attract is over 2 million and is one of the world’s seven wonders.

The tower has a glass floor at its observation level. You will also find here the revolving restaurant overviewing the fantastic views of the city and Ontario Lake. You will have fun in CN Tower as there are lots of attractions inside.

Royal Ontario Museum is the largest museum in Canada. It attracts millions of guests every year to view its wide selection of art and world culture, making it the most visited museum in Toronto. It showcases over 6 million items from dinosaurs and minerals to Canadian history and African art.

One of the unique landmarks in the city is the Toronto City Hall that opened in 1965. Every year the place hosts the new year celebration and the festival of lights. Most of the popular TV and movies, such as Resident Evil, were shot here. The Toronto City Hall was also featured as the Devon Corporation headquarters in Pokemon.

The Massey Hall is a popular venue for lectures and concerts, attracting people all over the world. It hosted various events like weddings, boxing matches, religious events, beauty contests, political rallies, and many more. Toronto Massey Hall will remain a vital part of the city’s cultural and entertainment scene.

Casa Loma was built for Sir Henry Pellat, a wealthy financier but is now known as one of Toronto’s landmarks. This historic house museum is located on a hill with a gothic-style castle. It was built between 1911 to 1914.

As the Toronto City Hall, it has been the favorite spot for TV and movie shows like Scott Pilgrim vs. the World, The Pacifier, and X-Men. In 1920, the home was converted into a hotel for the wealthiest Americans who want to drink legally. The stables were used as a place for sonar development and production.

Union Station is the first and the biggest railway station in Toronto and is situated in Front Street West. The municipal government of Toronto owns the building. From 1975 up to the present, the station was listed as the National Historic Site. It can accommodate up to 250,000 passengers a day. Toronto Terminals Railwaymanages the station and is connected to the city’s streetcar system. It is the main passage point when going to Toronto Pearson International Airport.

The Art Gallery of Ontario is where some of Canada’s best artworks and worldwide are displayed. It houses around 95,000 works of art from all over the world from the 1st century up to the present. The gallery is the largest in North America. This iconic building is located in the Grange Park of downtown Toronto.

Most of the best buildings are located in downtown Toronto, and one of them is the Roy Thomson Hall. It is where the Toronto Symphony Orchestra usually performs. With the unique circular design, the hall stands out as an outstanding work of art.

The suggested name for the structure is the New Massey Hall. But since Roy Thompson is the one funding it, the building was named after him. The Toronto International Film Festival was held here and the venue for Canadian politician Jack Layton’s funeral in 2011.

Toronto has become the most populated city in Canada and is recognized as one of the world’s most multicultural places. Most of its residents are from other countries who choose to work and live here. Due to that, it boosts the real estate market in the city.

If you are one of those who plan to stay here in Toronto permanently, check out Condo Mapper. You can find condominiums here for sale at an affordable price. There is also an option for you to rent the unit for a specific number of months. If you want to know more about the fantastic places in Toronto, your comments are much appreciated.

What can Local Handyman Services do For Your Home?
7 ways to make more space at home
Why Your Clinton IA AC System and Thermostat Stopped Working
Apply These 6 Awesome Ideas to Brighten up Drab Walls
4 Factors to Consider When Choosing Entry Doors
5 Reasons Roof Prices Differ Between States
Why Are Gutters Necessary?
The Best Roofing Type for Your Commercial Project