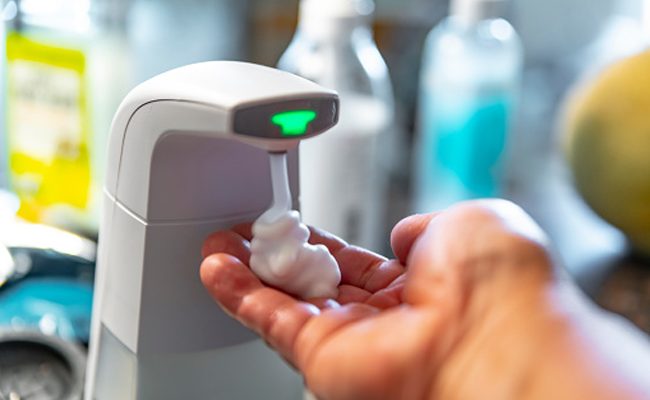 As Indians, we all distinctly remember our elders keeping aside a tiny piece of leftover bathing soap for washing hands later on. Don’t we? Maybe some of us still do it. It was just that we collectively ignored the tons of bacteria that were residing on those pieces of soaps.

Oh, we should not forget that every member of the family would use the same soap for washing their hands!

Sometimes it’s baffling to think that we survived those bacteria, our own and that of the others, without falling severely sick too often.

Like hand dryers, soap dispensers are normally seen in public toilets, hotels and the likes to ensure that people can maintain the basic levels of hygiene even outdoors.

And it’s necessary to have such dispensers that don’t require the users to touch the soap which hundreds others would have previously used, which was the case before the use of soap dispensers.

The cool things about a soap dispenser

When we talk about how technology has actually made lives safer and easier, we should look at the everyday things. For example, washing hands. At first, we may think ‘well, there isn’t much scope here to make things easier or better’ but, as we can see today, the benefits we get from can’t be quantified – it’s about hygiene.

Here’s the cool part: they work either with motion sensors or infrared energy. High end tech for washing hands!

These are some of the benefits of using an automatic soap dispenser:

How does it add value?

Though we have already breezed through the benefits of a soap dispenser, there are other subtle things it offers.

Our expectations with anything that’s kept in the bathroom would range from ‘takes less space’ to ‘creates manageable mess’. However, in the case of soap dispensers, one can expect a lot more – like expecting it to make the bathroom look ‘cool’. Because of the amount of space it takes up, though not significantly lesser than a regular soap bar, we get some sleek designs.

Why should you buy an automatic soap dispenser, a wall-mounted one?

We should not be still talking about how important being hygienic is in the post-COVID world. But take it as a reminder – a wall mounted automatic soap dispenser is a must in today’s world, be it for public places or at your home.

Viruses and bacterias can sneak into almost every single place(they are, actually. But not all of them are life threatening) and we can prevent getting affected by them by doing simple things like using an automatic soap dispenser.

The Top 5 Trending Designs in Bathroom Decor for 2021
Six Types of Water Tap: What are the differences?
5 Bathroom Linen Closet Ideas You’ll Love
4 Tips to Pick Right Bathtub for your Home
Different Types of Square Bathroom Basins
How to Remove Bathroom Sink Faucet Handle That Has No Screw
How to Install a Linear Shower Drain?
10 Tips for Buying Effective and Unique Bathroom Faucets