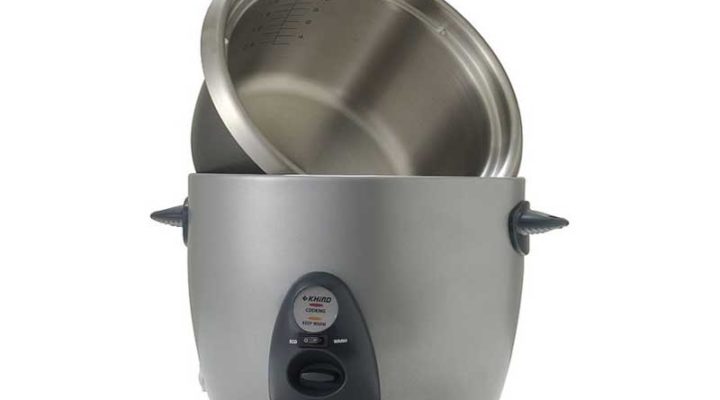 How does rice cooker work? This question must have crossed your mind once in a while – at least people have wondered about this during their lifetime.

Technology has brought us a lot of great stuff as well as the easiness to tackle everyday tasks in such an effective manner. It doesn’t mean that cooking rice manually is super difficult – it’s just too much of a hassle and you will need to pay close attention to several things.

First, you will have to keep on a watch over it. If you are distracted or forget about it, it may boil dry and burn the rice at the bottom. Yes, only the bottom is scorched but the rest is also ruined because the burnt affects the smell and also the taste of the rice. Second, you will have to be sure about the proper time. If it is too early, you will end up with mushy rice – looking more like porridge.

But if it is too late, you have burnt rice. It’s a good thing that we have a rice cooker right now, which can help so much in making well-cooked and tasty rice with the perfect texture. So, how does the cooker handle the cooking and not making the rice burnt, even when you don’t turn the machine off?

Two major elements are crucial in turning the little (and hard) grain into a big and fluffy morsel: a lot of heat and also water. That’s why the rice needs to undergo four stages to reach the cooked state. First, the rice sits in the water. The second stage is boiling. The third stage is steaming or absorbing water, and the final stage is resting.

The rice cooker working principle incorporates these four stages. It has primary parts that include the main body, the inner (cooking) bowl, a heating pad (operated by electricity), the thermal-sensing part, and several buttons. When cooking rice in the rice cooker, you soak the rice in the water within the inner cooking pan with a proportion of 2:1. The bowl is generally made from metal, such as aluminum. It is thin, enabling the electricity to be conducted well.

The heating pad has a temperature sensor as well as the heating element in it – and the pad itself is positioned underneath the bowl. There are usually springs on the heating pad.  They are designed to press against the bowl’s bottom so the springs can conduct the heat well and properly.

How the Process Happens

When you turn on the rice cooker, the heating pad will heat the bowl by delivering the heat to the water and rice. At this point, the mix is dominated by water so the heat will make it boil. Once the water starts boiling, steam starts to form and it begins to rise (from the bowl). Along with the steam, there is heat that goes along it. Because the heat is taken away by the steam, the temperature at the bowl’s bottom will be maintained within a safer perimeter. The temperature won’t be higher than 212 degrees Fahrenheit or 100 degrees Celsius.

You see, rice is composed primarily of starch. The starch itself has a composition of sugar molecules’ long strings that are tied together, creating a chain-like structure. When you heat the rice, the hydrogen bonding process will happen. It means that the long strings (chain) would be attached to the passing water molecules. The hydrogen within the water will bond to the oxygen atoms poking out of the chains’ sides. As a result, the (rice) grain would absorb the water and the gelatinization process happens.

This is the process where the connections between those chains are weakened and they aren’t as firm (or solid) as before. If you add more water, the chains would be even weaker, turning the rice grains into a paste-like gooey texture. This is the reason why you don’t need to have excessive water to cook rice. You only need a proper amount so the rice can absorb the water well and then swell – and yet, the amount of water won’t be excessive so the structure of the rice won’t break down completely.

Now that you already understand how does a rice cooker work, you may still have questions about the warm rice and how the device doesn’t burn it. After the water has been absorbed by the rice, the heater still delivers heat to the bowl; thus, delivering heat to the rice too. But since there is no water to remove the heat, the bowl’s temperature rises pretty fast.

Because of the drastic increase in the temperature, a certain mechanism inside the cooker is activated. When it is active, it sends out a message that the rice has been done. Once it is activated, the rice cooker automatically turns down the heat or turns it off completely. In general, the rice cooker will switch automatically to the warming stage. This point is the resting stage.

For regular rice cookers, they have the so-called bimetallic switch. They are two metals that expand within different rates (when heated), activating ‘over the 100 degrees Celsius’ sensor. When it happens, these two metals would release a latch and produce the ‘clunk’ sound. You may be familiar with this sound. When it happens, you know that the rice is done.

The rice cookers won’t make the rice cooking speed go faster. It would be a miracle to expect a super-fast cooking process because the molecule’s transformation process does take time. However, using the rice cooker can remove all the hassle of having to keep an eye on your rice. You can set it everything, press a button, and just leave it to do other chores. Before you know it, your rice would be ready and done! Using the rice cooker will help you to enjoy the better result with fewer mistakes, so you won’t have to deal with burnt rice or such thing alike. So, how does a rice cooker work? You already know the answer. I hope the explanation satisfies your curiosity!

5 Essential Features for an Outdoor Kitchen
How can you make your kitchen looks modern?
9 refrigerator organizing tips in 2022
6 of the Best Kitchen Cabinet Colors for Your Home
How Does Your Food Taste? - Three Ways to Find Out
The Best Kitchen Organisation Tips
What Are the Best Brands for Kitchen Appliances?
Top Safety Tips for the Kitchen