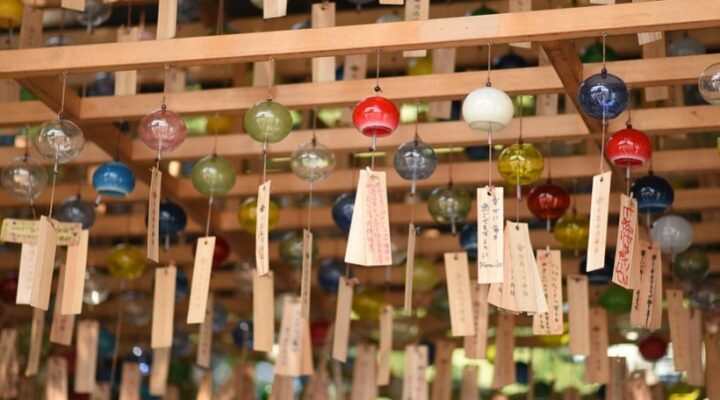 Did you know that the largest wind chime ever recorded in the Guinness Book of World Records, was built by a gentleman named Jim Bolin, back in 2012 and it was estimated to be 42 feet in height? Sadly, it’s in the state of Illinois in the US. So, for those who get to pull its strings and visit it whenever they like, lucky you! Keep ringing those chimes. For the rest of us who are in other regions, we’ll just satisfy ourselves from the ones that can be purchased online or just start our DIY projects.

These magnificent inventions date back to the 1100BC during the ancient Chinese civilizations. Back then they were known as ‘Fenglings’ and were revered as spiritual objects that attracted kindred spirits, who were meant to be kind.

One online source, states that Archaeologists have managed to dig up evidence of these objects, ones that were created using bones and seashells, and can tell that they were from thousands of years ago. Almost the majority of the cultures had one form or the other of wind chimes and were sure each one of them had their own story to tell and belief that surrounded them, up until the modern-day, they still exist and are being used widely in many cultures and countries. Additional information can be found here.

With the advent of the ports that opened up during the early 1800s in Japan. Cargo of a variety of things was being sent to Europe from the East, including these, adorn in beautiful materials using metal, bamboo, glass, wood, bells and similar items to make different types of sounds reminiscent of percussion instruments.

Reasons for Having A Wind Chime

As mentioned earlier, the origins of these objects began with a spiritual reason, but as the decades went by other facets influenced this, and people started to purchase them for various other reasons such as a means of prestige, sound, decoration or just visibility (some have light-reflecting objects).

For Soothing Background Sound:They are made using different materials that emulate different sounds, and a lot of people prefer these sounds in the background when hung in their houses or offices. When the wind catches them the hanging objects hit each other and play a sound. There are a variety of tones, such as a tinkling sound made by bells or an ephemeral, sonorous, and slightly bass-filled tones that come from using bamboo or wood as raw materials.

When you purchase them, you have the option of choosing the different frequencies from low to high depending on what they’re made of. Not to mention, you can make them yourself in the comfort of your own home too.

For ‘Feng Shui’ Purposes: The concept of Feng Shui,is ancient Chinese geomancy, and a traditional practice that translates into the English language as ‘wind and water’. Some say it dates back to the early 3500BC while others place it slightly later towards the 4000BC. In any case, it is a spiritual practice based on Chinese metaphysics and takes into consideration building architecture that has ‘invisible forces’ that binds the universe to humanity and earth together. This concept is known as qi. Some reputable online sources have a lot more information about this such as https://www.thespruce.com/what-is-feng-shui-1275060.

The use of bells and bell windchimes in the Buddhism religion signifies good health and peace. They are used to honor what’s known as the Three Treasures i.e. the Dharma, the Buddha, and the Sangha (Naillon). Before Buddhists sit down to pray, they ring a bell, to call on these three spirits for protection, and also to help everyone focus their minds on what’s to come – prayers.

As you can see, they offer a lot more than just adoration and music. They also help bring wealth, prosperity, happiness, and luck into the home. While embracing an entire school of thought around them. In a nut-shell what this concept teaches us is that help gets rid of negative forces of energy when placed in certain parts of a building. I’d say, who wouldn’t want some positive energy vibes in their home?

For a More Practical Reason:If you have a lovely flower or vegetable garden, and you have problems with birds that are harmful to it. These wind chimes can be used to deter them easily and in a harmless manner.If you choose to make them yourself, everything you need to know about wind chimes can be found online. Different sources can help you choose the right raw materials and you can possibly become a professional at it too.

There are tons of different categories of chimes, such as spinners or mobile, and some are made specifically for outdoor use and others for indoor use. The difference between the two will reflect upon the materials used and the sizes, as well as the design. Waterproof materials are favored for outside and other more delicate materials such as glass are preferred indoors. Not everyone likes them too loud or too shiny and as such, there is a variety of different choices for everyone’s tastes.

These ancient instruments have an inherent relationship with the wind, that acts as its composer. They will always have a deep-rooted history that has far surpassed any changes in the modern era, and will forever be known to man. Whatever your reason for having one, it adds a touch of ‘something positive’ to the atmosphere.

How much Mold Inspection and Remediation Costs in Beaumont CA?
Light up Your Home: A Guide to Pendant Lighting
Benefits of Rebuilding & Recovering with Chicago's Fire Damage Techs
Why Your House Painters Need To Follow These Rules When Painting Your Home
5 Ways to Update Your Bedroom on a Budget
5 Feng Shui Tips to Harmonize Your Interiors
6 Important Tips for Furnishing a House
5 Renovation Ideas for Homeowners