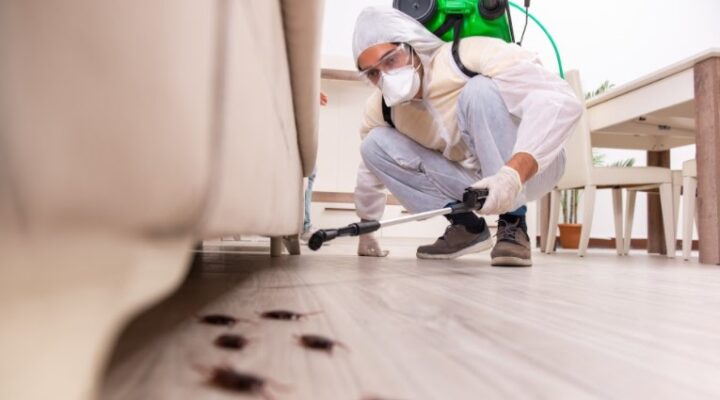 Household pests can do more damage to your life than you would imagine. Although many pests are essential in keeping balance to the ecosystem, welcoming and allowing them to stay at your home is the perfect recipe for disaster. Not only do household pests destroy your structures, furniture and other fittings, but they can also impact your health and lifestyle.

Here are ways on how pests can damage your home, to name a few:

Fortunately, you can stop household pests from staying and reproducing inside your home with the help of pest control from Yard Butler, who kill small, unwanted pests so that you can be comfortable in your home. These services ensure that they’re not just removing existing pests inside your household, but exterminating them for good as well.

If you’re worried about encountering household pests inside your home, or especially if you’re not even aware that there are creatures hidden in the nooks and crannies, these top 9 common household pests will give you a better idea:

As their name implies, bed bugs are insects that love to hang out on your bed, and feed off human blood – particularly at night. They’re characterized by their small, flat bodies which give them the advantage of hiding in various furniture, such as the bed frame, seams of mattresses, headboards, pet beds, and even in clothing.

Often, the unsuspecting traveler is carrying bed bugs with them, and passes them onto other individuals through clothes, luggage or personal possessions. When they arrive at home, these bed bugs usually lay eggs, which hatch and start a new colony soon after. When the eggs hatch, the bed bugs start feeding on the humans and animals in your home.

An excellent preventative and removal method for these bugs is to spray lavender and peppermint oil around your house, as they find it repulsive. They are also repelled by baking soda.

There are over 4,000 different species of cockroach, all of which are known as “true” household pests. But not all cockroaches are considered pests, as some species are beneficial; others are considered scavengers that eat plants and animals. In order to determine which types of cockroach are harmful, it’s important to understand what makes them a pest, and why they’re commonly referred to as such.

One characteristic of a cockroach is that they eat in groups, rather than doing it on their own. They’re also burrowers and can travel from place to place giving them the advantage of easy infiltration, infestation and reproduction in a house without the owner’s immediate notice. Cockroaches can move quickly, and infest a large area in a matter of hours.

Termites are one of the smallest insects, often referred to as ‘flying ants’, but only a small subset can actually fly. They can remain under the ground for long periods of time and lay their eggs in nests, then the larvae hatch and burrow through the soil. They live off plant and animal matter.

The most common termite species are called ‘colony ants’ which form large colonies and feed off food substances that are available to them. The name ‘termite’ was derived from the Greek word termes meaning thread or threadwork. The termites have the same basic body structure as ants, however they differ slightly in size and some are wingless.

Rats and mice are small rodents which are often difficult to spot in homes and offices, as they’re very stealthy. If they have come into your home, you’ll most likely know when you see large amounts of shredded fabric or paper, rat droppings around a food supply or ripped up cardboard.

The most important thing to realize when dealing with rats and mice is that these animals aren’t culprits or burglars, and that there are ways to trap them humanely. Non-lethal rat traps are probably available at your local DIY. After they’re trapped, set them free far away from your house. This way, you lose the rats and you don’t have to kill anything.

Another insect species that can bring harm into your home are mosquitoes, which feed on the blood of humans and other animals. Despite their small size, mosquitoes shouldn’t be underestimated. These insects love to reproduce in dark and humid places, and lay their eggs on containers with water.

Mosquitoes aren’t just annoying, but they can carry dangerous diseases as well, including malaria, dengue, Chikungunya virus, Zika virus, and West Nile virus. You can use non-lethal pest repellent methods to keep mosquitoes away.

Wasps are two-winged insects that are easily identified by their pinched waist. These social insects exist in different colors ranging from metallic blues to greens and yellows. They will sting people if they feel disturbed or threatened, and a small percentage of people can be allergic to this sting.

Wasp nests feed on a wide variety of plants and other types of food. They like to feed on the insides of the leaves of plants that are producing new leaves during the spring and summer months. If you find a small nest near your garden or in your yard, it could be a sign of a wasp infestation. Look for signs such as red, black, or white lines around the edges of the nest.

Ants can be a real nuisance to homeowners and business owners. They will typically swarm around small food sources, or seek shelter in cracks and crevices. You may notice the ants before the damage is done, and most often you won’t think anything of it. While they may look small and harmless, they can contaminate your food sources with disease-causing bacteria, and give painful bites that cause rashes and inflammation.

Additionally, some ant species destroy plants in your landscape. Watch out for the following pest ant species:

Again, with some peppermint oil at the entrances of your home or business, the ants will typically go back to where they came from.

Centipedes are familiar to many households, as they’re a nuisance in the yard. They’re well-known for their long, wiggly legs and can frighten homeowners when they come around their backyards. While they may look scary at first, they actually don’t do much harm to humans or our homes.

Centipedes are great hunters of other unwelcome household pests such as termites, cockroaches, flies, moths, and silverfish. These insects also don’t destroy your wood structures, contaminate the air or create webs and nests.

You can quite easily get rid of centipedes successfully without killing them, and the best way to do this is by safely evacuating their food source also, which is the insects mentioned above.

There are many different species of spider in the world, ranging from the tiniest of arachnids to the largest and deadliest known to man. While most spiders pose no threat to humans, a tiny percentage can deliver poisonous bites which can cause serious medical problems and even death. The two most dangerous spiders in the United States are the Black Widow and the Brown Recluse.

Like the centipede, spiders also feast on smaller insects such as mosquitoes. However, they’ll start to become a nuisance in your household once they build their nests and create webs in different corners of your home. Therefore, you shouldn’t neglect a few spiders in your home as they can reproduce quickly. If you catch the few that you do find between a lid and a sheet of paper and throw them out, then you shouldn’t ever be faced with a spider infestation. Not only that, but you’ll both be happier for the little time apart.

As a homeowner, it’s important to know the distinction between household pets and pests, and to identify which pests pose a danger to your daily life. Identification is the first step to pest control, whether it’s an insect, weed, animal or any other form of pest. The pests discussed in the article are only a few that typically exist in households, and if you’re not sure about the pest that has been destroying your home, make sure to get in touch with pest identification experts and find a non-lethal way to get them out of the house safely.