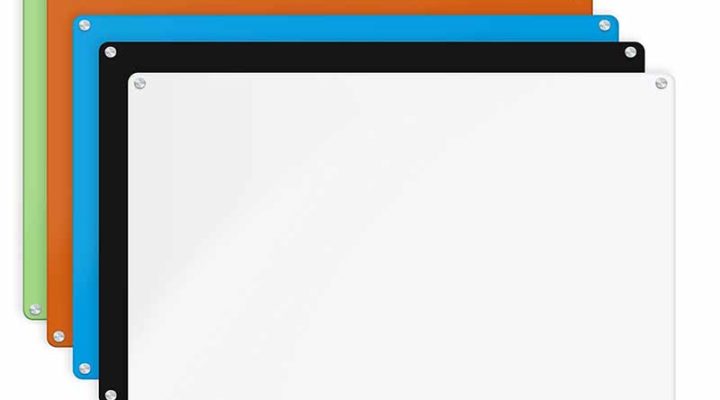 Whiteboards are typically the bread and butter of the educational industry as well as serving as a staple in almost all office setups. The younger generation is so accustomed to these boards that they may never have even seen a traditional chalkboard.

Chalkboards were the once the penultimate tool for conveying your message to an audience and were therefore readily implemented in schooling systems worldwide. However, they were quite messy and inconvenient to handle with their sticks frequently breaking and the board getting dusty. Furthermore, those allergic to chalk had no option but to leave the vicinity and find other ways of catching up. All this changed with the advent of whiteboards. They offered twice the durability and convenience of chalkboards along with a bunch of other features. Markers made no noise while writing and they were specially designed to be free of all allergens that may harm students or employees alike. Whatever you wrote on a whiteboard stayed there until you wiped it clean. Manufacturers also created whiteboards of all shapes and sizes to cater to any type of room or set up and some even made portable whiteboards allowing teachers or management to pass ideas along easily.

However, with the onset of technology and all its implications, one is left wondering whether whiteboards are still the most viable option. The needs of the hour are changing and people feel the traditional whiteboard to be lacking in some aspects. The industry needed to adapt. And that’s exactly what it did.

These cutting-edge boards offer all the traditional whiteboard does along with a few other advantages. Sound familiar? Yes, this is exactly what happened with chalkboards. They were pushed out of the market by a product that was simply better in all regards. Similarly, with the introduction of magnetic glass boards, we may soon find whiteboards getting replaced as the prevalent archetype.

Magnetic glass boards are made of tempered glass backed by a coat of steel that permits the magnetic function. These newer variants are incredibly versatile in blending with just about any type of setup due to their customizability. So, what is so advantageous about these boards that render the traditional whiteboard we’re all used to seem archaic and old-fashioned? Let’s break it down.

More in line with the 21st century

Whiteboards became commercially available in the 1960s. A time where architects preferred the sturdiness of strong concrete walls and were hesitant to use anything other than brick and mortar. Therefore, whiteboards felt right at home amidst the traditional wooden furniture and the conservative interior. That being said, contemporary interior designs nowadays feature one key component above all else. Glass. Buildings started to look more transparent and spacious compared to the gothic structures of the 19th or 20th centuries and whiteboards started feeling a little out of place. Glass boards on the other hand, were created specifically for this purpose. To cater to a changing architectural framework and to harmonize with other modern elements. These boards carry a sense of luxury and panache with them marking them as the better alternative especially in office setups. Additionally, company logos or school mascots can be printed at the back of the glass which makes them visible at the front as well as allowing people the functionality to write over them when required. Something never even conceived of during the whiteboard era. This is why you almost always find magnetic glass boards at office entrances or in collaborative rooms.

You could write on a whiteboard but you could never pin stuff on it. There needed to be a separate area furnished by cardboard where you had to use those little thumb pins. This meant you essentially needed two boards or a load of squash tape to satisfy both constraints. On the contrary, magnetic glass boards boast the functionality of having the same surface used in both regards. Need to write? Grab a marker and go crazy. Need to hang up an important document or a photo? Just get a magnet and do it on the same surface. Get more done with the same space!

If you grew up in the whiteboard era, there is a good chance you were able to witness the deterioration of whiteboards firsthand. After regular use, the white surface began to fade and no amount of cleaning could return it to its original state. The surface would start to turn jagged as well making it harder to draw a smooth line spanning the length of the board. In some cases, the surface even cracks, giving way to dangerous edges which may have serious repercussions. Glass boards, on the other hand, are not only capable of retaining the same smooth and pristine finish over many years, but cleaning them is a walk in the park requiring only a soft damp cloth and a cleaning liquid. Any markings made on these boards disappear upon maintenance as if they were never there (not the case with whiteboards where residue inevitably piles over time). Finally, although the glass surface virtually never cracks, in the rare occasion it does it will burst into tiny harmless pebbles instead of dangerous shards (you may want to research tempered glass if you’re confused about this).

Not just for writing on

These boards can hold your research notes or your family photo but that’s not all they do. Many interior designers use these boards as a decorative element in contemporary setups which feature an adequate amount of glass. This is due to the reason that you can have them manufactured in literally any color (although its best to select a light one if you intend to write stuff), shape and size. An incredibly useful luxury to designers who now have the power to create a board they think would fit best instead of having to tune the rest of the setup around a traditional rectangular whiteboard (emphasis on the monotony of WHITE).

Although the financial aspect still deters many people from shifting to these glass boards as they still cost a pretty penny, the benefits they offer far surpass those of other boards and you may find a return on your investment sooner than you think.

Which Type Of Salt Lamp Is Best For A Spa Or Massage Centers?
How to Remove Glue from Glass?
How to Add the Perfect Amount of Holiday Cheer in Your Bedroom
Featured luxury wall with an antique mirror for your bedroom
The Best Construction for Muay Thai in Thailand of Sport Center
See How to make your Nursery room into a Sanctuary
Decorate Your Baby’s Nursery with These Ideas
Are There 24 hour Fitness Racquetball Courts?