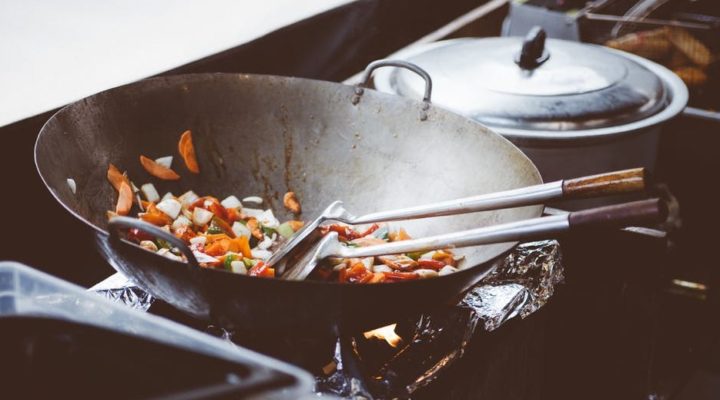 There are certain things that every person needs in their homes’ kitchen and appliances are one of the essentials. While there are lots of appliances with promising benefits and advantages to choose from, one should know that not every appliances advertised is needed.

Wanting to have that restaurant stripes on your grilled favorites like a pro? Then you might want to have this cast iron grill pan. This indestructible appliances is oven safe, and can be used on all cooking surface even over a campfire. It does not only give you that mouthwatering feature in your food, but it is also a multi-functional appliances that works well with slow-cooking dishes.

However, mostly grilled pans have harmful fumes generated by preheating chemically treated nonstick appliances but don’t worry, this equipment give you a non-stick surface. What’s more, it keeps heat well. It can help you to singe meat at high temperatures and consequently conserve your dishes warm for a longer period.

Surely having different kinds of equipment with its different purposes might cramp up your kitchen. What’s more is that it takes up much of your time in the kitchen when cooking several dishes. Well, a new innovation has sprung up in the market which might ease up your preparation time and effort just for you.

An instant pot is basically a single appliance that does the job of seven different kitchen appliances  – this versatile multi-cooker does the job of a slow cooker, electric pressure cooker, Japanese rice cooker, steamer, yogurt maker, sauté/browning pan, and warmer. It is also high-powered ̶ enough to defrost meat or poultries then cook. By its functions, you can surely cook up an entire meal in one pot and save your time and effort during preparation and clean-up.

If you’re tired of having to clean-up your pan rigorously just to have scratches visible in it afterwards then a non-stick pan might be for you. Most of the common cooking wares are a bit hard to clean since they usually suck up too much oil. On the other hand, non-stick pans are known as scratch resistant due to their coating.

Additionally, non-stick pans have a uniform distribution of heat due to its thick, flat bottom with gently sloping sides, making it ideal for preparing eggs and omelettes and other fried and sautéed dishes. Some also offers oven safe non-stick pan, which really makes it a really good companion in the kitchen.


Cast–Iron is a form of appliances that has been used decades ago thus might seem an old-fashioned appliances choice. However, this strong and sturdy equipment distributes heat evenly and maintains heat well unlike the stainless steels that distributes heat unevenly. Pan-roasting or braising meat? Reach for the cast iron.

In addition, cast-iron skillets are a multi-functional appliances that is the right tool for searing, sautéing, braising, baking, simmering, frying, and roasting that could be even cooked in an oven, stovetops, grills, or even use it over campfire. This appliances’ versatility surely offers up wonders in your cooking and to your kitchen.

Dutch ovens are heavy cooking pots with a tightly fitting lid and are mostly made of cast iron which what makes it great for braising meats. Once the liquid reaches a gentle simmer, it requires very little energy to maintain that temperature thus retaining the heat of the food inside. From braising to deep frying, dutch ovens could be relied on.

Having a heavy lid, this means that you don’t lose liquid due to evaporation, so the steam inside remains inside the pot which bathes your pot roasts with a gentle moist heat. Also, it can be used on stovetops and ovens and can withstand extremely high heat which makes it more functional around the kitchen.

A wok is a round-bottom pan that is originally from China and is one of the widely utilized cooking wares around Asia. It is as well referred as one of the commonly used all-around cooking utensils in a kitchen, which can be used in different ways such as for pan frying, stir frying, deep frying, braising, searing, stewing, steaming, poaching, boiling, soup-making, smoking, and roasting.

Known for its wide shape and volume, woks makes it easier to cook in a large amount of food. Also, due to its high heat retention and the need for little cooking oil, many have considered it to be much healthier than the standard frying pans. This kitchen tool is surely a appliances for all seasons.

Surely you’ll have your thanksgiving party or holiday celebrations over your home to showcase your cooking. That’s why you’ll have to at least have a big tool for a big job for those kinds of events or just even make enough pasta sauce from fresh tomatoes to last for a while.

Large enough to solve your crowd-feeding problem, this kitchen equipment lets you cook up to five pounds of pasta. Additionally, its distribution and retention of heat is unquestionable, together with its feature of a clear glass lid ̶ which makes it easy to keep an eye on your cooking, whilst the pouring/draining feature make such a large pot much easier to use.

It is always up to you and your needs in choosing the right kind of equipment you wish to have. Although, it would be wise to take advantage of today’s improving equipments in wishing to accommodate your necessity and bring convenience to you.

How to Find the Best Gas Log Service
How To Apply Epoxy Resin To A Bar Top
Your cookware’s bestfriend; all-in-one spatula for nonstick pans
Benefits of Ceramic Cookware You Need to Know
Things to Consider When Designing a Modular Kitchen
What Are the Benefits of Remodeling the Kitchen in My Home?
Top 15 Best Kitchen Equipment List and Their Uses
How To Wash Dishes In A Single Sink