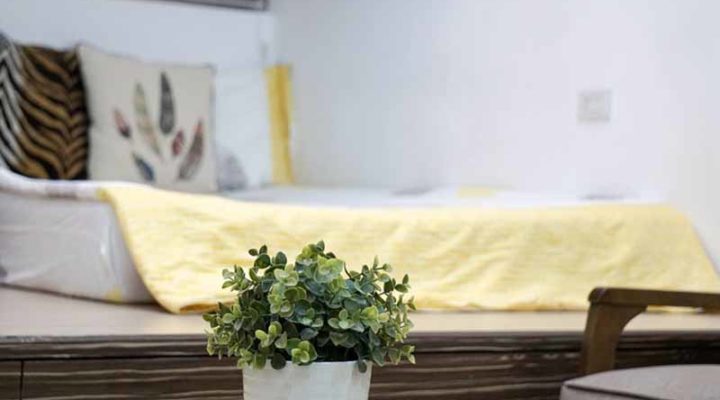 Time spares none. Although this statement is usually used to describe the fragility of human life, it can apply as well to our rooms.

With time, the initial order falls down, and our rooms begin to look like at some point, something went horribly wrong. Don’t get overwhelmed by the feeling of apathy. You can make your room feel fresh once again if you’ll put some effort into reversing this downward spiral. In a second you’ll learn how to make your room clean again. Let’s go!

I know that we are all busy, and with our hectic lives, it might be a serious challenge to put things exactly where they belong, instead of just randomly throwing them around, but at least try. It wouldn’t be such a problem if we didn’t often forget to clean after ourselves later. Trust me; it’s the same story as with many illnesses – it’s easier to prevent rather than to treat a full-blown problem.

Many of us disregard this part, but making your bed every morning is a crucial step. It will provide you with a sense of accomplishment and make your room look nicer. It’s not that difficult, and if you can’t even do that, well, it’s a slippery slope.

Plants are your friends!

If you feel like you need to relax, there’s no need to go on a spiritual retreat to the Laos jungle. The presence of house plants in your home may be enough to remind you that your problems are temporary. Besides their calming effect, and making indoor air pollution less severe, they are a great option for people who feel like they need more company, but who think that a child or a dog would be too much responsibility. And let’s be honest – they also look nice!

Don’t try to be sneaky!

Many people are guilty of throwing things they no longer need under their bed or a table. Okay, let’s put it differently: not many people don’t do this occasionally. I know that the place under your bed is a designated area for all the things that could come in handy one day, although the chances that their presence there will not be absolutely pointless are rather small. According to the experts at https://www.retrodesigns.com.au/, though, the crucial part, is to check regularly whether the pile of trash has not gotten surprisingly large, and if it did, then you must react!

Who said that Christmas lights are for Christmas only? The time of the year does not matter; if they make your room a brighter and happier place, then go for it. If you think that it is still not enough, then hang a mirror so that the lights will reflect in it, making your room seem both bigger and less prone to inducing depression. And given the fact that you are likely to spend a considerable portion of your life in your room, the effects on your mental health cannot be overstated.

If your walls are bare, then you should consider hanging a tapestry. You would achieve a better result by painting your walls, though it would require much more effort. If you can dedicate a somewhat limited amount of time for this project, then choose a tapestry that will contrast with the rest of the room, and add some new energy. If you’re not big on tapestries, then find anything – a poster of your favorite football team, band, or actor and fill the empty spaces! Your room will become more inviting to all the visitors.

Sometimes there’s no need to purchase anything new because just shaking things up is enough to enliven the mood. Even moving your bed around could make the appearance of your room more friendly. If the initial result isn’t particularly compelling, just keep trying until you find a layout that suits you. Just try not to damage your furniture too much during the process!

There’s nothing wrong with mixing different styles, at least, if there’s foresight to it. Unfortunately, some of us are hell-bent on stuffing their rooms full of unmixable styles and unnecessary objects, which has the same effect as being constantly glued to your social media. You’ll be overwhelmed by the multitude of stimuli, and your ability to focus will become seriously impaired. If it seems that chaos has somehow managed to gain the upper hand, and you intend to overcome inertia, you should strike back swiftly. Throw out all the things about which you have at least certain doubts and start from scratch. Are there any signs of mold growth on your mattress, but apart from those esthetic shortcomings it is a perfectly fine mattress? Don’t hesitate, throw it out!

Now get to work!

The amount of effort that you’ll need to put into making your room fresh again will vary depending on the current state of your room. Let’s be honest, though; you cannot blame anyone else other than yourself! Don’t beat yourself up about it though, as you can reverse this trend if you just intend to do so. Godspeed!

Breathe Easy: Top 10 Benefits of an Air Purifier
The Importance Of A Daily Home Stretching Routine
10 Easy Ways to Motivate Yourself to Run
Top 4 Questions About Hepatitis to Ask Your Doctor
How to Use a Pressure Washer Safely Without Injuries?
How Do I Block Out My Neighbours Noise?
Superior and Inferior Foods That Have Effects on Sleep
Radon Testing -Is It Essential?